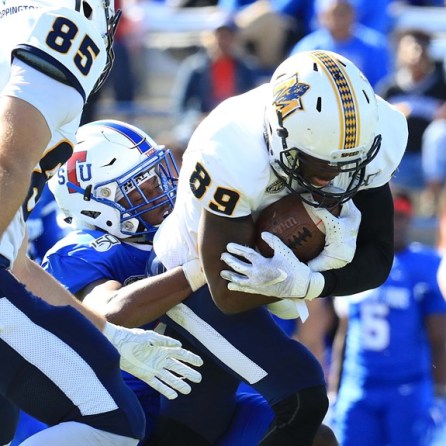 The Murray State football team won for the second time in as many weeks with a 34-17 victory over Tennessee State Saturday at Hale Stadium in Nashville, Tennessee.

The Tigers struck first in the game with a five-yard run from T’kendrick Roberson that capped a 12-play, 97-yard drive. However, the Racers answered emphatically with back-to-back touchdowns at the end of the first quarter and start of the second to give themselves a 14-7 lead.

After TSU added a field goal with under three minutes to go in the half, the Racers ended a promising drive with an interception by Preston Rice with just over a minute and a half left in the stanza. However, the Racers would get ball back just over 30 seconds later when TJ Warren cause a fumble that was picked up by Kendrick Catis, his first of two on the day. Rice then led the Racers down the field quickly capping the drive with a 37-yard pass to LaMartez Brooks to put his team on top 21-10.

The Racers extended their lead in the fourth on a 41-yard field goal from Zaden Webber, only to have the Tigers close the game minutes later on another short run from Roberson to put his team down just one touchdown, 24-17. Following the Roberson touchdown, the two teams traded long drives that ended in turnover on downs, followed by a three-and-out from Murray State to give TSU the ball back with 4:37 to play.

The Tigers began the drive with two first downs in three plays and looked poised to score until Catis popped the ball loose from Roberson and fell on it to give his team the ball with 3:22 left on the clock. Murray State would go on to score on a 58-yard run by Jared McCray before sealing the win with an interception by Marcis Floyd on a 1st and goal by TSU from the Murray State five.

The Racers tallied over 500 yards of total offense for just the second time this season in the game with 232 on the ground and 271 in the air for 503 total. Rice accounted for over half of those total yards himself as he was 24-for-44 for 271 yards and three touchdowns in addition to rushing for an additional 63 yard.

Brooks led the MSU receivers with four catches for 76 yards and a score, while Cory Thomas and Jared McCray led the rushing attack with 74 yards each. With the win, Murray State improves to 4-3 on the year, 2-1 in OVC play and 1-3 in road games.

Murray State returns to action next Saturday at home as it hosts Eastern Kentucky for Homecoming 2019 at 2 p.m.

Game Notes
While Tay Carothers became the first Racer since 2007 to recover two fumbles in the same game in the season opener against Pikeville, Kendrick Catis did not have to wait that long. Just six games after Carothers picked up two loose balls, Catis accomplished the same feat to go along with five tackles, 1.0 for loss and a forced fumble.
With the win Saturday, Mitch Stewart improves to 4-0 all-time against Tennessee State and their head coach Rod Reed. In addition, the four consecutive wins in the series is now the second longest by either team with Murray State holding the record with five from 2008-2012. Murray State has now also won four straight games at Hale Stadium dating back to 1995.
The Racers had five takeaways in Saturday’s game and lost the ball just once themselves. The five turnovers by the Tigers came by interceptions from Quinaz Turner, KJ Preseley and Floyd and the pair of fumble recoveries by Catis.
Punter Steve Dawson had one heck of a game Saturday, pinning the Tigers inside their own 20-yard line on four of five of his kicks with all four of those punts also coming in short-yardage situations. Dawson placed kicks at the three, six, seven and 12-yard lines in the game, while kicking from the 42, 41, 47 and 33-yard lines.