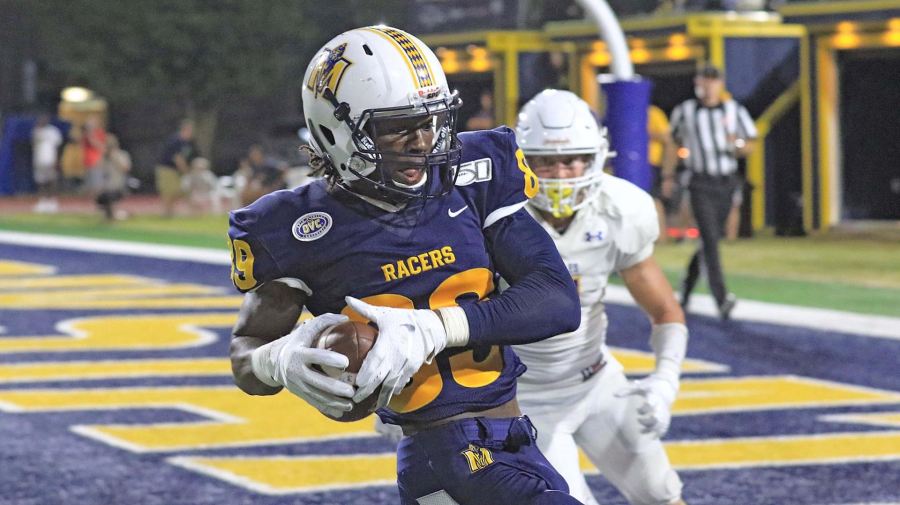 Murray State accounted for over 500 yards of offense in the game led by incredible performance by quarterback Preston Rice. The redshirt sophomore from Waynesboro, Tennessee was 17-for-24 in the game with no interceptions and four touchdowns on 214 yards. In addition, he rushed for 86 yards on nine carries and caught a 12-yard touchdown pass from Jacob Bell in the third quarter.

LaMartez Brooks led the MSU receivers with five catches for 130 yards and two touchdowns, while Ty Terrell led the special teams with a 67-yard punt return for a touchdown.

Defensively, the Racers had five takeaways on the day with four fumble recoveries and an interception and held the Eagles to less than 250 yards of total offense and less than 100 yards rushing. Anthony Koclanakis led the attack for Murray State with eight tackles and an interception, while Scott Humpich had six tackles, 2.0 sacks and a forced fumble.

Next Saturday, the Racers will open OVC play on the road when they make the short trip over the state line to take on UT Martin. Kick-off from Hardy M. Graham Stadium in schedule for 6 p.m. on ESPN+.