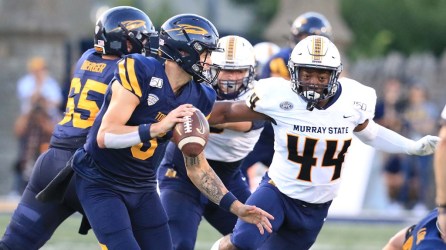 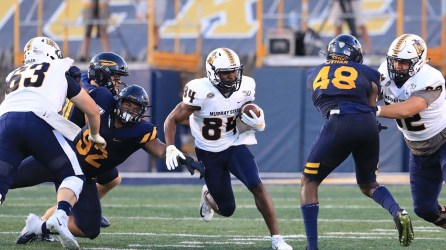 The Murray State football team had over 300 yards of offense Saturday night at Toledo, however it just could not find the end zone, as the Rockets shutout the Racers, 45-0 at the Glass Bowl in Toledo.

The Racers went toe-to-toe with the Rockets for the first half trailing just 3-0 after the first quarter and just 17-0 at the break. Murray State actually outgained the Rockets, 238-237 in the first half, however Toledo scored four touchdowns and held the Racers to less than 100 yards in the second half to seal the shutout win.

Despite two interceptions, quarterback Preston Rice once again turned in a very gritty performance going 26-for-36 for 180 yards with 87 additional yards on the ground. Defensively Davonta Wilson led Murray State on the night with 11 tackles, while Anthony Koclanakis followed with 10.

The Racers return to action next Saturday at Roy Stewart Stadium when they take on Morehead State in the annual Family Weekend game. Kickoff is scheduled for 6 p.m. on ESPN+.