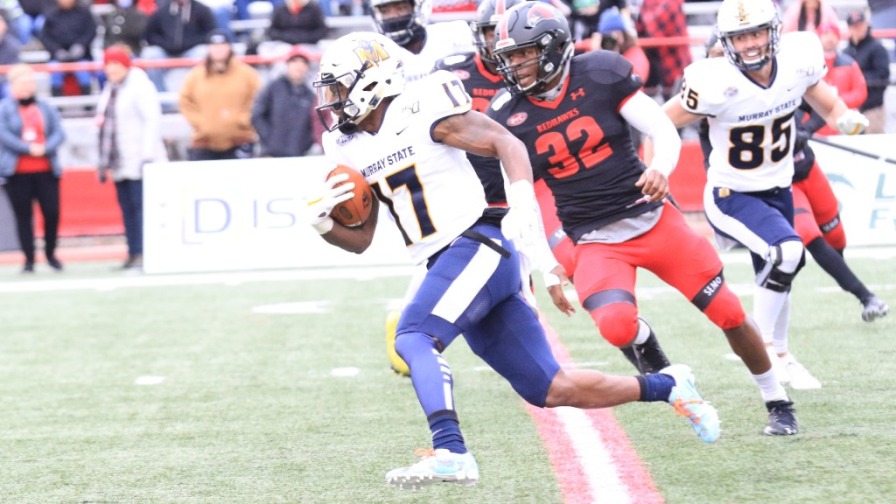 The Murray State football team never gave up Saturday as it went toe-to-toe with 13th-ranked Southeast Missouri at Houck Field in Cape Girardeau, but ultimately the Racers came up short, falling to the Redhawks, 31-24.

Murray State struck first in the game with a touchdown in the opening stanza and quickly jumped out to a 10-3 lead in the early part of the second quarter. Later in the second, Zach Hall put his team on top for the first time in the game on a 61-yard interception return to give the Redhawks the 17-10 advantage.

However, just two minutes later the Racers responded with a touchdown to LaMartez Brooks from Preston Rice with over 5:00 minutes to play in the half to tie the game at 17. After a Kendrick Catis interception on the ensuing SEMO possession, the Racers took a 24-17 lead into the locker room with a 28-yard touchdown to Armani Hayes from Rice.

However, in the second half the well ran dry for the Racers as they could not find the end zone. Meanwhile, SEMO scored twice in the half to take the lead, seal the win and with it a share of the 2019 OVC championship.
Rice would finish with 284 yards on 34-48 passing, while also collecting 73 yards on the ground. On the receiving end, LaMartez Brooks and Armani Hayes would each be responsible for a touchdown, while Jonathan Moss hauled in six catches for a team-high 64 yards on the afternoon.

Anthony Koclanakis led the Racers in the game with his third-straight double-digit tackle performance and the his seventh of the season with 11. TJ Warren and Jason Johnson followed with eight tackles each, while Catis had seven.