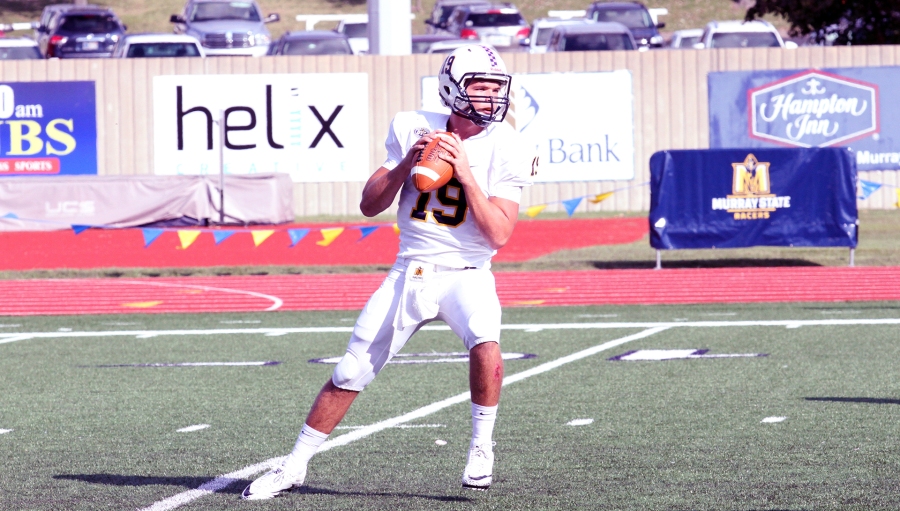 Just The Facts
The Murray State football team scored two touchdowns in the last 10 minutes of regulation to force overtime with Eastern Illinois Saturday at Roy Stewart Stadium in Murray. However, a blocked field goal in the second overtime allowed Easter Illinois to escape with the 27-24 win.

How It Happened
Down 21-7 with under 10 minutes to play, the Racers began their rally when Jordon Gandy caught a Shuler Bentley pass two-yards behind the line-of-scrimmage and went 59 yards for the touchdown with 9:51 to play. Murray State forced EIU to punt on the ensuing drive and got the ball back with 6:29 remaining.

Getting the ball on his own 20, Bentley took the Racers 80 yards down field and capped the drive with a 15-yard pass to D.J. Penick to tie the game at 21 with 4:06 left on the clock. On the Panthers next drive, they ate 3:08 of clock time and went 59 yards only to miss a field goal and give MSU back the ball with 58 seconds left in regulation. On their final drive of regulation, MSU had back-to-back seven-yard rushes, but Cornelius Page put an abrupt end to the Racers’ final effort when he picked off Bentley with 31 seconds to play. The Panthers ran one play, before allowing the clock to expire to send the game to overtime.

In the first overtime, the two teams traded field goals with Gabriel Vicente connecting from 36 yards for Murray State and Matt Severino hitting from 22-yards out for Eastern Illinois. In the second overtime, Severino connected again, this time from 27-yards out. However Vicente’s attempt was blocked, allowing EIU to hold on for the 27-24 double overtime win.,

About The Panthers
Isaiah Johnson had a monster game for Eastern Illinois on the ground with 236 rushing yards and a touchdown. Bud Martin was 18-for-30 through the air for EIU with a touchdown and three interceptions for 192 yards. Bradley Dewberry led the Panthers defensively with eight tackles, while Terrell Greer had a game-high 2.0 sacks.
As a team, EIU had 543 total yards of offense, despite committing four turnovers. The Panthers built on Johnson’s 236 yards for 367 total rushing yards in the game, while adding another 193 yards through the air. With their three-point win Saturday, the five wins this season for the Panthers have now come by just a combined total of 12 points.

Bentley Breaks Out
Shuler Bentley had a career day Saturday, passing for a season-high 332 yards on 34 completions with two touchdowns and one interception. In addition, he also had the first touchdown of the game in the first quarter for the Racers on a 23-yard keeper.

Gandy Goes Off
Jordon Gandy had a season-high 193 yards on 10 catches with a touchdown Saturday. His 59-yard touchdown catch started the Racer rally and his 48-yard one-handed catch later in the quarter was an integral part of the drive that tied the game.

Career Days
Sean Rodriguez, Quincy Williams and Lamont Crittendon led the MSU defense Saturday with 10 tackles each. The 10 tackles were a career-best for both Rodriguez and Williams. Bishop Woods and Isaiah Foster also had big days for Murray State with nine tackles a piece.

Cherry Picking
D’Montre Wade, Zach Shipley and Don Parker each had interceptions against Eastern Illinois Saturday, marking MSU’s third multiple interception game of the season. The Racers have now had at least one interception in all but one of its games this season, for a total of 12, while Wade’s pick gives him a team-high four on the year.

OK, What’s Next?
The Racers will now take a week off before returning to action on October 28 for Homecoming 2017. Kickoff at Roy Stewart Stadium between the Racers and rival Eastern Kentucky is set for 3 p.m.