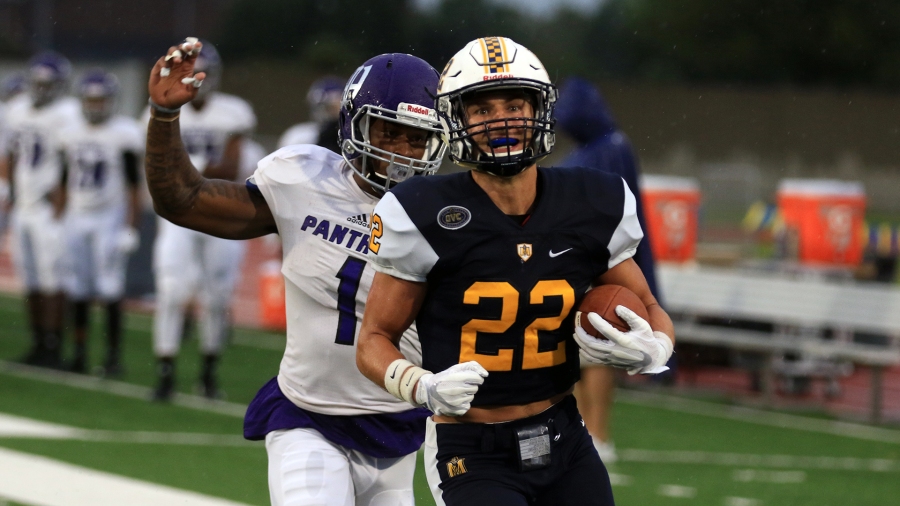 The Turning Point
The Racers scored 46 first-half points and never really allowed the Panthers to find any sort of a groove, offensively or defensively. The Racers allowed Kentucky Wesleyan just 11 yards in the first quarter and 46 in the first half. The Panthers would finish the game with 159 yards, but it paled in comparison to the 457 by the Racers.

About The Panthers
Mike McGee was 12-for-25 with 129 yards, a touchdown and four interception for KWC on the night, while Ladarrius Dunn had the lone score. Malcolm Johnson had a team-high nine tackles, while Ty Martin-Miles had eight.

Tipping The Scales
For the first time since 2014, the Racers ended the game with more rushing yards than passing yards. MSU had 243 yards on the ground Thursday and 214 in the air. Coincidentally, MSU’s opponent the last time they had more rushing yards than passing was also Kentucky Wesleyan. That night, the Racers had 408 yards rushing and 312 passing.

Reservations For Six
Dylan Boone scored the second touchdown of his career Thursday when he returned an interception 60 yards in the first quarter. Boone’s first career score came in 2014 at Northern Illinois when he returned a fumble, also for 60 yards.

The Fantastic Four
With three touchdowns in Thursday’s game, Jordon Gandy became just the fourth receiver in MSU history to have two games in which they scored at least three touchdowns. Walt Powell, Janawski Davis and Michael Slater were the first three Racers to accomplish the feat.

One Shot
Freshman Corey Newble only attempted one pass Thursday, but he made it count. His lone attempt and completion was a 52-yard bomb to Jordon Gandy for a score.

The Swat Team
The Murray State defense had four interceptions and four pass breakups Thursday, playing a pivotal role in the Racer win. Marico Paige, D’Montre Wade, Dylan Boone, and Jason Johnson had the interceptions, while Marquez Sanford had two breakups and Bishop Woods and Wade had one.

A New Era In The Backfield
Three different running backs scored for Murray State Thursday night, it was also the first time any of the three had appeared in a Murray State contest. Nick Collins led the way with 75 yards, while D.J. Penick racked up 70 yards and Nolan Nichols had 61. Penick also caught a three-yard pass to tack on a receiving touchdown as well.

The Kicking Game
Gabriel Vicente was seven-for-seven on extra points and made a 30-yard field goal in his Racer debut, while James Sappington averaged 59.0 yards on seven kickoffs with three touchbacks. Landon Stratton only punted twice, but even in sub-optimal, rainy conditions, he ended up with identical 47-yard punts each time. His 47.0 yard average on the night was well above his career average of 41.8

How’d He Do That?
The Racers converted a two-point try in the first half thanks to a nice piece of running by Jensen Feggins. Feggins caught the ball on a pitch by Landon Stratton and ran towards the right side where it looked like he would either be tackled or forced out of bounds at around the eight-yard line. He then switched direction and ran the entire width of the field to the left corner, where he walked into the end zone thanks to some key blocking from his teammates.

OK, What’s Next?
The Racers close out their season-opening two-game home stand next Saturday when they welcome the 15th-ranked Bears of Central Arkansas to Roy Stewart Stadium for a 6 p.m. kickoff.