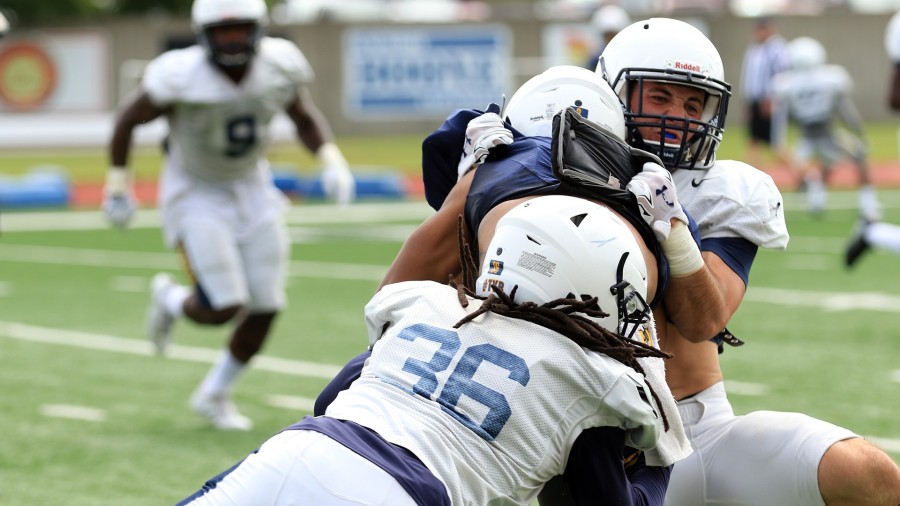 “It was all positive today,” said head coach Mitch Stewart following the scrimmage. “In the first scrimmage, I really liked the defense’s physicality, but I didn’t think we were very good tackling in space, but today I thought we improved dramatically, I don’t really remember any missed tackles. Like the last scrimmage, here were no knock backs, the offense wasn’t getting any extra yards by knocking the defense back, in fact, it was the defense that were the ones knocking the offense back.”

The continued success of the defense was not lost on coordinator Chris Boone either, as he attributes the growth on the field to the group’s growth as unit. “They are gelling as a group more than anything right now. I see some energy and I see some guys flying around because they know what to do. When you know what to do, you play fast. Free the mind, free the feet.”
“We played a little faster today,” continued Boone. “We did give up some balls , I think we had three balls given up on true freshmen corners, so we are going to keep working with those guys. Other than that, I saw some guys moving around and being physical and that’s what it’s about, but at the end of the day it’s also about having fun and I think they today they had fun.

When asked about individual performances, Boone said Jason Johnson and Kenney Wooten stood out. After sitting out the start of camp, it was the first action of the season for Johnson, who had a couple of big plays on the day, while Boone said he continue to like Wooten’s explosiveness.

Offensively, it was a trio of underclassmen receivers that caught the eye of Stewart in Jonathan Moss, Sylvaughn Turner and Austin Thomas. “I am very excited about Moss’ growth from year one to year two, he’s just completely different. Both his body and his route running and I’m really excited about him.” As for Turner, Stewart thinks he has the tools to do big things for the Racers this season. “He’s got big play material, he’s got big play make-up, he can do the things we are asking him to do and he can get in one-on-ones and win them. If he can become more consistent, he has the tools to be really good.” Rounding out the trio is Thomas, a true freshman that Stewart says had a “big day,” one that included a key reception on the sideline.

While the rest of the campus was moving on Saturday, both Stewart and Boone indicated they were moving close to shoring up the depth chart. “Right now we need to make sure we get the best 22 guys,” said Boone. “We are looking for the top 22 players and are looking to start getting those guys reps. We put up a depth chart after the first scrimmage, we will put up another one tomorrow and now we will focus on finding the best 22 players and getting them ready for Kentucky Wesleyan.”

Murray State will open its 2017 season on August 31 at 6 p.m. against Kentucky Wesleyan at Roy Stewart Stadium.